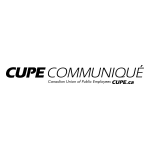 “It’s too bad that, unlike Andrew Scheer, Pierre Poilievre does not hold American citizenship, because he would be right at home as Governor of a state like Alabama.

Pierre is a career politician who has been collecting a six-figure salary on the public’s dime since he was 24, and he’s spent every minute of his time in office fighting against fair wages, good pensions and a better life for working people. He is not a worker, and he definitely doesn’t get what it means to be a member of the working class.

His leadership will be a disaster for working people in Canada.”