Now that both the State of California and Los Angeles County have declared states of emergency on monkeypox, AHF is urging L.A. County health officials to swiftly ramp up and improve its uneven response to the virus outbreak that is primarily affecting gay men or men who have sex with men (MSM)

AHF will revisit its 6-point Monkeypox Plan that it proposed to County officials in early July that includes public briefings, safety warnings and ads in bathhouses and on hookup apps, lobbying the federal government for vaccines and supplies, engaging with community partners like AHF and engaging in research with universities on the changed characteristics of the virus in this pandemic

LOS ANGELES–(BUSINESS WIRE)–AHF, the largest global AIDS organization with treatment clinics or operations in 45 countries, will host a Zoom Press Teleconference THURSDAY, August 4 at 11:00 am PT (2:00 pm ET) to discuss actions that it believes Los Angeles County health officials should take on monkeypox now that both L.A. County and the State of California have declared states of emergency on the virus. 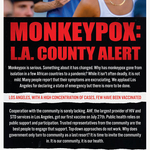 AHF will revisit its six-point monkeypox response plan which it first proposed to county officials in July. The formal declaration of a state of emergency in Los Angeles County now allows government and public health officials to mobilize additional resources and request recovery assistance under the California Disaster Assistance Act to increase and deploy funding and emergency planning to combat the monkeypox outbreak more effectively.

“Now that a formal state of emergency on monkeypox has been declared in Los Angeles, we are calling on the Los Angeles County Department of Public Health to swiftly scale up and improve its response to the virus—including securing $10 million in funding for monkeypox and STDs—after an uneven, disjointed start with monkeypox,” said Michael Weinstein, President of AHF. “County health officials can use AHF’s six-point plan as a roadmap to quickly and efficiently get on track with monkeypox and also rely on community partners like AHF to assist. Now is the time to put the ‘public’ back in public health.”

As part of efforts to educate its own AHF Healthcare Center patients and clients as well as the general public who may seek free HIV or STD testing at one of AHF Public Health Division’s 35 AHF Wellness Centers in the U.S., AHF created the following AHF Monkeypox Information Sheet.

Monkeypox has become a worldwide public health crisis, with more than 25,000 confirmed or presumptive positive cases reported as of today across more than 75 countries where it is not considered endemic, according to Reuters’ Monkeypox Factbox.

AIDS Healthcare Foundation (AHF), the largest global AIDS organization, currently provides medical care and/or services to over 1.6 million individuals in 45 countries worldwide in the US, Africa, Latin America/Caribbean, the Asia/Pacific Region and Eastern Europe. To learn more about AHF, please visit our website: www.aidshealth.org, find us on Facebook: www.facebook.com/aidshealth, follow us @aidshealthcare or subscribe to our AHF podcast “AHFter Hours.”