In its newest advocacy ad in the Los Angeles Times (Sunday, August 7), AHF sounds an alarm about Los Angeles County’s woefully inadequate response to date to the monkeypox outbreak and urges county officials to designate $10 million—approximately $1 for each LA County resident—to combat monkeypox and STDs

LOS ANGELES–(BUSINESS WIRE)–AHF will run a full-page, full-color advocacy ad targeting Los Angeles County Public Health officials over their woefully inadequate response to date to the ongoing outbreak of monkeypox, which has overwhelmingly affected gay men, men who have sex with men and transgender people. 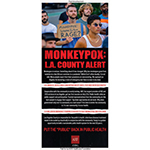 The ad headlined “Monkeypox: LA County Alert”, criticizes L.A. County officials over its disjointed and disorganized response to the outbreak, cases of which first started appearing outside of Africa in Western Europe and the United States beginning in mid-May. It decries the county’s lack of effective cooperation with community partners, who have the ground level networks, outreach and programs already in place to aid the county in mounting a more effective response providing education, prevention, testing and vaccinations, particularly given the limited supply of vaccine doses.

AHF also calls on LA County to designate $10 million—approximately $1 for each LA County resident—to combat monkeypox and STDs, which have increased dramatically during the COVID-19 pandemic.

This ad follows a previous monkeypox ad AHF ran in last week’s Sunday Los Angeles Times. That ad, headlined “LA County Fails Gay Men AGAIN” invoked how L.A. County officials failed gay men on its AIDS response at the start of that epidemic over 40 years ago are sadly once again not taking enough appropriate steps on monkeypox to ensure the public’s safety.

According to LA County Public Health, as of August 5, 2022, there are 496 confirmed monkeypox cases in the county with 99% found among males and 90% of those cases within the LGBTQ+ community. Despite these numbers continuing to grow, Los Angeles city and county officials have remained silent and still have not declared a state of emergency. In addition, access to monkeypox vaccines continue to be limited.

AHF’s LA Times ad is summed up with a powerful statement that reads “Put the ‘public’ back in public health.”

AIDS Healthcare Foundation (AHF), the largest global AIDS organization, currently provides medical care and/or services to over 1.6 million individuals in 45 countries worldwide in the US, Africa, Latin America/Caribbean, the Asia/Pacific Region and Eastern Europe. To learn more about AHF, please visit our website: www.aidshealth.org, find us on Facebook: www.facebook.com/aidshealth, follow us @aidshealthcare or subscribe to our AHF podcast “AHFter Hours.”